We are used to hearing the most radical experimentation in the smallest of spaces, so it somces asa shock to encounter a bunch of premier league electroacoustic troublemakers in a building of epic scale. The Jesuit church in Sion, on the river Rhone in the Swiss Alps, certainly sounds bast on this live recording. The four musicians, like eagles, constructed nest in the organ loft and on nearby ledges, and proceeded to play for four hours. The results (from November 2001) have been telescoped to a portable 80 minutes to the wmo label, run by London based Basque musician Mattin. Jerome Noetinger (MIMEO, Metamkine) and Lionel Marchetti have worked as a duo for the last 12 years. Bothe use electroaucoustic setups, in Marchetti’s case involving speakers, mics and lashing of fresh feedback. David Chiesa is a bassist who has appeared in a trio with Tom Chant and Eddie Prevost. And organist Jean-Luc Guionnet is a Xenakis student and member of Hubbub, with a solo organ album on A Bruit Secret. Tangerine Dream this ain’t, but the musicians are audibly enjoying the church’s generous acoustic. Much patient, ominous exchange of drones and scary electronic malfunction noise is interpesed with electric stroms and howling saxophone, as a group let rip with dark exuberance. Guionnet’s sax in particular dives from the rafters like a delirious harpy, and we all descend into an almighty, soul-shredding, sonic inferno, which I can imagine the Jesuits being pretty happy with. Elswhere there are longueurs where not much happens, possibly representing the Purgatory side of things. An audacious and at times utterly exhilarating release. By Clive Bell

Site-specific, electro-acoustic free improvisations, both of these CDs are named for and reflect the settings in which they were recorded. Sharing Paris-based alto saxophonist Jean-Luc Guionnet and bassist David Chiesa in common, the sharply different sound of each notable disc results as much from the location as either quartetâ€™s instrumentation.

Clustered adjacent to the organ of a Jesuit church in the Swiss town of Sion, Guionnet â€“ who also doodles on the organâ€™s double bank of keys â€“ and Chiesa, plus musique concrÃ¨te specialists Lionel Marchetti and JÃ©rÃ´me Noetinger manipulating electo-acoustic apparatus, use this ecclesiastical space to reflect, amplify and transmogrify their output. Over 79 plus minutes the result is dry, cluttered and somewhat claustrophobic.

Almost as lengthy at 71 minutes, BelvÃ©dÃ¨re, recorded in a scenic mountain village, references the commanding view seen in the French region of ArdÃ¨che. Twittering bird calls and intimations of footfalls through the long grass complement the captured electro-acoustic interface. More open and spacious then Sion, the one long track shouldnâ€™t be confused with found sound, however.

Scattering a series of sensitive microphones throughout the house and the around the property, Ã‰ric La Casa â€“ who recorded a similar project within the Paris metro with the saxophonist â€“ captures improvisations from Guionnetâ€™s alto, Chiesaâ€™s bass and Emmanuel Petitâ€™s guitar, which are seamlessly mixed together in real time.

If intermittent organ fortissimos define Sion, then unexpected vocal excursions from warbling fowl do the same for BelvÃ©dÃ¨re.

Buzzing wave forms pulsating from the electric apparatus serve as a leitmotif in the Swiss session, with Guionnetâ€™s strident tongue slaps and Chiesaâ€™s percussive strums subordinated. Often to hack through the dense block of ambient hiss â€“ which admittedly he contributes to with organ glissandi â€“ the saxophonist resorts to exaggerated altissimo shrills or foghorn-like croaks. Similarly col legno string slaps that sound as if theyâ€™re given additional heft using a mallet, allows the bassist to make audible statements within a sound field dominated by dense oscillating electronic tones and triggered whooshes.

Identifiable ambience is one thing. But when spetrofluctuation, heavy-breathing slurs and concentrated tongue pops are needed by the reedist to obtrude from the miasmic motor-like reverb, it becomes apparent that some undulating electronics are excessive. The concentrated and nearly undifferentiated tonal sludge that characterize the pieceâ€™s final section suggests that the polyphony between acoustics and electronics that initially enlivened this minimalist experiment has been undermined.

Also a touch overlong, BelvÃ©dÃ¨re adds a restrained feedback buzz from Petitâ€™s guitar amp to offset the open-air, aviary accompaniment. Petit who plays acoustically in the all-guitar quartet MisÃ¨re et Cordes, Chiesa who has collaborated with saxophonist Michel Doneda and Guionnet, featured in the reductionist quintet Hubbub, balance on a median between electronic and acoustic impulses here. Unlike the guitarist, however, who, except for a few identifiable strums, remains as a background sound source, this setting gives the bassist and saxophonist ample scope in which to express themselves.

Guionnet contributes protracted overblowing, plus intervallic, fortissimo reed obbligatos. These often mask the other playersâ€™ notes, but not the bird songs. Chiesa highlights spiccato scratches and sul ponticello sweeps as well as double-stopped notes. Thereâ€™s even a point where the guitar and double bass strings combine in double counterpoint framing the saxophonistâ€™s reed sputtering and squeezed vibrations.

Eventually a mellow rusticity arrives due to the contrapuntal contrast between the order musical and the untamed natural worlds. Just when you figure the resulting silence constitutes a definitive summation and finale, modern life interferes. What sounds like a large truck driving first one way then the other across the sound field twice disrupts the concluding instrumental improvisations.

Worth investigating as opposite â€“ or is it rural verses urban â€“ examples of how improvisers utilize found and electronically created sounds, both CDs are noteworthy, but

neither BelvÃ©dÃ¨re nor Sion is completely satisfying. Maybe thereâ€™s something to be said in favor of the discipline available in a recording studio. 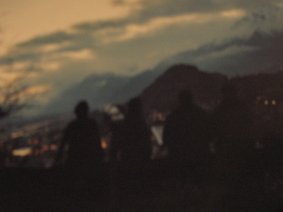