fflux (Influx) is a music, produced on-siteâ€”at a precise time, with material from a precise site. The sites were selected according to a transport-related principle : stations, roads. Mixing and processing are done simultaneously, recording in stereo with a van used as a studio Special thanks : Dan Warburton (translation) copyright Â© sacem 1999

Bouquetot, Autoroute A13, 10/24/98 At the exit of a village, on a high bank, the A13 motorway cross a small road whichpasses through the bank in a hemispherical tunnel made of sheets of corrugated iron. The weather is bad in the morning while setting up of the devices. It rains all afternoon long during the recording. The van is parked near the road, at the entrance of the tunnel. Amplified steel strings are stretched between the iron tunnel and the van, which is rocked by the wind, creating a kind of irregular breathing. As the bank of the motorway is high, we can hear different acoustic spaces : above, the motorway. Below, the sunken road, where, close by the bank we can’t hear the noise of the motorway.

Paris, Gare de Lyon, 04/02/99 Fine weather with a shower about 5pm. Two recording positions are set up along the platform : one in the middle, one at the end, over 100m away. The first, "sticking its nose" in the trains at the platform, records the general activity of the station, the movement of the passengers and the SNCF platform announcements through a flurry of shortwaves. The second captures the global cityscape of the site, especially the sound of the points changing, and trains entering and leaving the station. One of the team members mixes in with the crowds with a high-frequency microphone. (With kind assistance from : Nicolas JauffrÃ©-Bullot, radio waves & JÃ©rÃ´me Florenville, HF microphones. Thanks also to Sebastien Gautheron and Samedi 14.)

Port-Jerome, Raffinerie, 04/01/99 The EssoÂ© petroleum factory is several kilometres wide, and is arranged in wide orthogonal streets and avenues, delimiting different production units. Very fine weather, without any wind. Sound recording is done from the running van. Sometimes it stops to record a certain detail or engine close up. Here the main difficulty was not to use generator-powered equipment, but a recording device running off batteries. Petroleum material coagulates at normal temperature : a steam boiler feeds a steam circuit to keep the material hot, helping it to flow in the tube. The sound of the valves regulating steam pressure is characteristic of the factory. The recording takes place on an emergency training day. (With the assistance of Philippe Cordier, van driver.) 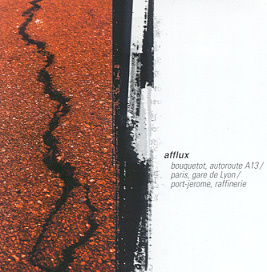